(As interviewed by Sister Leong Dai May and shared prior to the Jesus Heals Terengganu Miracle Service, October 2000) 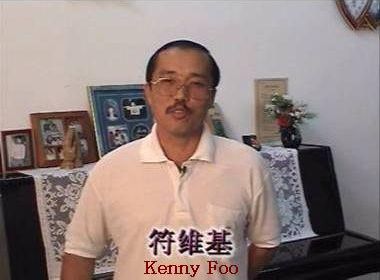 My mother was a medium. I was brought up in idolatry and steeped in filial piety and obedience. We followed traditional Chinese beliefs and customs closely. I never compromised my idolatrous beliefs and rejected Jesus Christ whenever my sister tried to give me the good news of the Gospel of Christ.

It all started in 1988/1989 with a throbbing pain at the back of my head. Ignoring all fears, I simply attributed the pain to my excessive drinking and smoking. The pain did not cease. Later, I developed a persistent cough and discovered dark-coloured blood in the sputum. The phlegm was black in colour. Again, I gave the matter a shrug, attributing them to my lifestyle.

A mechanic by profession, I was cleaning a carburettor in my workshop when some petrol accidentally entered my left eye. This was a common occurrence so I just splashed water to clean the petrol out of my eye. I did not give the matter a second thought until over the next few days, my eye became horribly swollen. My eyeball bulged so much that I could almost scoop it out from my eye-socket with my finger!

I was referred to many eye-specialists. Finally, the last one agreed to conduct tests on my eye. The doctor diagnosed tumour in the eye and suspected that I had cancer. I was referred to another hospital for further conclusive tests.

In June 1993, treatment began on my left eye. After giving me many uncomfortable tests, the doctor discovered that the tumour was actually sitting in the nose area and not near the eye. By this time, I was getting weak and losing a lot of weight. I had been to many specialists, taken a lot of Chinese herbs and prayed to many idols. I had spent a lot of money because of my sickness.

But I was given even worse news: the tumour from the nose had spread to the eye, the brain and the throat. Now I understood better the throbbing pain I had first encountered in the late 1980's. The doctors declared my condition hopeless and gave me three months to live.

I had to be brave to face such devastating news. I had to comfort my wife and my three children, then aged three, six and nine. In the privacy of my bathroom, I thought about leaving my young family. I began to burst into uncontrollable sobs. It was the darkest hour of my life. A nightmare!

I returned to the hospital and begged the doctors to give me a chance to live. I was so desperate, I did not mind losing limb and organ just to retain my life. Despite the doctor's advice that chemotherapy and radiation cannot heal me because my cancer was at its advanced stage, I wanted to cling on to any last hope.

I continued to pray to the idols even more fervently for my healing. The doctor gave in to my request. I had to undergo three cycles of chemotherapy (drip-type). Each cycle meant 12 bottles of drip continuously fed into my blood stream. I began to vomit so much that I became afraid to eat and drink. It was torturous, agonising and very painful. On the sixth day, my hair began to drop.

The bad news was that after taking the full course of chemotherapy, the tumour was still sitting there!

Undaunted, I went for my second hope, radiation. Looking at the tests and diagram, the doctor suggested 35 days of radiation. I was given four shots of radiation every day, angled at the head, both sides of my cheeks and my throat. My throat burned. My skin peeled. I had ulcers all over my mouth. By this time, I was unrecognisably thin and weak.

After completing the radiation treatment, I was even more depressed to learn that the tumour had not shrunk one bit. This confirmed the doctor's fears that both treatments would not work on my advanced stage of cancer. I was asked to return home to rest. When the doctor said that to me, I knew that he was asking me to prepare for my death.

While I was resting at home, friends and relatives visited me. My brother-in-law, a pastor, shared Jesus Christ with me. My sister cried and pleaded with me to receive Jesus into my life. She reminded me that we had lost our elder brother to nose cancer within six months in 1986. She did not want to also lose me (the only brother left) through a similar circumstance. I rejected her and told her to leave. I even threw aside the Bible my brother-in-law had given me. As the sole remaining son, I wanted to be loyal and obedient, fully filial to my parents.

At 5.00 pm, after my sister had left the house, I heard a voice speaking to me, "Do not harden your heart. Open your heart to Me. Give Me an opportunity to heal you."

In wisdom, she gently told me that I had missed out consulting one doctor. Eagerly, I wanted to find out who this doctor was.

"Doctor Jesus. Give Doctor Jesus a chance," she said and went on to lead me into repentance and the sinner's prayer.

I accepted the Lord Jesus Christ into my life on 16 September 1993. I yelled and cried during my repentance to the Lord. I sobbed like a baby. My entire family gave their lives to Jesus Christ and accepted Him to be our personal Lord and Saviour that Thursday evening. Suddenly, I felt a new surge of hope and life.

I went for a Healing and Deliverance Service the next day. When the pastor prayed for me, I fell to the floor under the power of the Holy Spirit. I felt a warm hand touching my head and face. I felt very comforted. When I got up, I realised there was nobody touching my face. I remembered the immense joy that filled my being.

Next day, I joined the Intercessory Class with my wife and both of us were baptised in the Holy Spirit. During my first Sunday Service, I just walked right up for prayer. I was very hungry for God. I began to unceasingly worship Him, seeking Him and reading His Word. (I had picked up the Bible which I had earlier discarded.)

Every morning, I faithfully worshipped the Lord and ministered unto Him. I was utterly shaken and broken before Him. I looked forward to being with Him and enjoying His presence.

The second week, I returned to the Healing and Deliverance Service. This time, I saw a vision of streams of blood being poured onto my head right down through my body. Bewildered, I sought the pastor for an explanation. She just leapt for joy and began to shout thanksgiving unto the Lord for His blood cleansing my cancerous cells.

At that moment, I just knew that I was healed. I was still thin and weak and had no hair but I returned home and confidently told my wife that the blood of Jesus Christ had healed me. I would not succumb to death.

My appetite returned and for the first time after the chemotherapy treatment, I did not vomit out my food. By the third month, my hair grew; by four and a half months, I felt completely healed. I did a CT scan to confirm my healing. Hallelujah! All glory, honour and praise to our God and His Son, Jesus Christ. The tumour had disappeared!

The doctor marvelled at my recovery as I shared Jesus Christ with him. He thought that I had discovered some traditional Chinese herbal remedy for my cure but I boldly testified that no one, absolutely no one, had prescribed any herbs or medicine for me.

Not even the doctor could find any solution when I needed one desperately. I was willing for any surgeon to remove my eye or nose to save my life. Nobody wanted to accept me in my condition. Only Jesus Christ accepted me. Jesus restored my life. I can only be grateful to Him.

My life is in Jesus Christ. I have given my life and rights to Him. He is good! He is trustworthy!

Even before I received my healing from the Lord, I made a commitment to serve Him in missions, intercession and at my workplace.

I learnt one thing that saved my life: I did not want to only rest assured on my faith in Jesus; I lived out my faith, I acted on my faith. I clung on only to Jesus. No medicine accompanied my healing. I was healed in 1993, and tests have shown that I am totally fit.

When I was not a Christian, many lovely brothers and sisters-in-Christ (as I now call them) came and tried to share Jesus Christ with me. I rejected them, embarrassed them and scolded them. I told them to leave my house if they wanted to talk about Jesus but said I welcomed them if they joined me in gambling or drinking.

But now, I am not ashamed to go throughout Malaysia and all over the world to tell people how Jesus Christ, the true and living God, saved me, healed me and changed my life completely even though I was a great sinner and rejected Him in the past. God forgave me when I repented sincerely.

But God demonstrates His own love toward us, in that while we were still sinners, Christ died for us. (Rom 5:8)

From 1988 to 1993, only the Lord sustained me. When the doctors passed the death sentence on me, only Jesus Christ gave me hope and life without asking for my limbs or organs in exchange. Instead, Jesus Christ exchanged His life for mine! I give Jesus Christ the highest doctorate, the highest honour and the highest glory.

<<< Back to Testimonies page