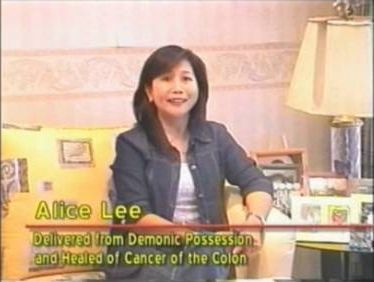 Jesus Christ is the same yesterday, today and forever. And Jesus heals today, praise God! By the grace of God, I am still alive today.

It was in 1994 that I was robbed at knifepoint. I was showing a client an apartment but he tied me up and blindfolded me before taking my things. Somehow, I managed to get myself free and call for help.

I later identified this guy and he was arrested. But then, I fell sick and was hospitalised for seven days. I thought it was only high fever but actually, the spirit of fear had already gripped me. At the time, I had drifted away from God due to personal reasons.

On the third day after being discharged from the hospital, I suddenly fell sick again. This time, the spirit of death came over me at about three o'clock in the morning. I felt breathless and ran to the kitchen to have a drink. I saw a bright light and was so deceived that I thought what most of us would think - that the light was Jesus and that He was coming. But it was not so.

I later realised that the light I saw was actually Satan masquerading as the angel of light. While I was in the hospital in my backslidden condition, I had opened the door to the false light. I had allowed a friend who believed in Mahikari to lay hands on me and to release that light to me.

If the light I saw had been of God, I would have felt peace and joy, the fruit of the Holy Spirit. But I went into a daze as if I were insane. My mom, who was then not a Christian, went to the medium and the fortune teller. They told her that I only had three percent life left. I myself thought I was dying because I felt so old.

Thank God that my brother managed to contact Pastor Jean, whom we did not even know at that time, to request her to pray for me.

My mom challenged Pastor Jean. "I give you three days. If by the end of three days, my daughter is not well, I will bring her back to the medium in Melaka."

Praise God for Pastor Jean who was able to convince my mom that if she wanted to see me well, she would have to believe in Jesus. I thank God that through her faith, she saw the miracle in my life.

Pastor Jean brought me to her apartment in Sri Sentosa. (There was no Prayer House in Persiaran Duta as yet.) When I arrived there, I was already in a daze. I felt like I was floating and talked nonsense. I just fell flat on the couch and I could not respond anymore.

The intercessors later told me that they kept on reading the word of God to me to get it into my spirit. At the same time, they prayed continuously for me. My brother was also asked to be involved in praying. With the help of cassette tapes, they kept up the worship throughout the whole deliverance session. Because I could not respond to ministry myself, my brother was asked to repent on my behalf.

As they read the word of God to me, tears began to run down my face and I began to manifest. Suddenly, the anger within me arose, the bitterness and unforgiveness that I had carried with me for nine years against someone who had hurt me very much. I could not forgive.

They asked me to forgive but I said I could not. I told them that he did not deserve my forgiveness. But they said that I must choose to forgive even if I did not want to forgive because Jesus had forgiven me. Finally, they managed to get through to me and healing began to take place.

One thing after another began to manifest as the Lord delivered me from all the evil things that I had allowed into my life, especially during those backslidden years. As God cleansed me through a massive deliverance, I vomited stuff in all kinds of colours - eventually 30 bags full!

Pastor Jean used the authority of God against Mahikari, the effects of having been robbed and of being so badly hurt. I spat everywhere because I was so angry but thank God that I was able to release all the hurt that I received.

The worst was on the second night. I was not aware of what was happening but was later told that I was on the floor, spinning. I spoke Taiwanese in a poetic way, which I had never learnt. (On a visit to Taiwan, I had entered a temple that had 200 Buddhas and even brought back a lot of the little monk figures as souvenirs. When you backslide, you do things that open the door for spirits to enter.)

I grew worse. The intercessors kept calling me but I was in the valley of the shadow of death. I felt so old and that I would soon die. My brother was so concerned that he wanted to take me to the hospital. Pastor Jean told him, "You just took her out of the hospital and now you want to send her back."

Suddenly, the Lord Jesus woke me up and I was able to respond. Praise God! I thank God that by His grace, I was set free in less than three days. The next morning, I was able to praise and give thanks to God.

After being healed, I went to the Station of Life (a Bible school in Sabah). On my return a month later, I went back to work. I was told not to but I could not let go because I enjoyed making money. Although the Lord had done so much for me, I still did not feel secure. My security was money. I still thought I needed money in order to serve Him.

One year later, I was diagnosed as having colon cancer. When I was first hospitalised, I did not even know that I had cancer. After what I had been through, my parents did not want me to fear. They only told me that there was a growth in my large intestine and I needed to be operated on because my stomach bloated like a balloon.

Actually, I had a call on my life but I did not want to fulfil that call because of a lot of past hurts. So the Lord had to deal with me. Sickness does not come from God. Sickness comes from Satan. When we are disobedient, God allows trials in our lives. Just before the operation, I bargained with the Lord, "If You give me back my life, I will serve You."

That very month, I had made a good sum of money. But God said, "Now you see you have the money, but the money will be gone. You have the money but you do not have life. When you have Me, you have everything." Eventually, I had to spend more than RM20,000 on medical expenses.

Two weeks after I was discharged from the hospital, I went to the surgeon and it was revealed to me that I was suffering from cancer. I asked what my chances of survival were. He told me that I could go for chemotherapy but that even with the treatment, there was no guarantee of cure.

During that time, I did not have enough faith to believe Pastor Jean when she told me, "Do not go for chemotherapy. It will kill you."

I took my dad's advice. He was not yet a Christian and he said, "You need Jesus and you also need the doctor." I give all due respect to the doctors but I now realise that God is our Great Physician.

I went for chemotherapy for a while. My hair dropped. It was bad. I can identify with people who go through it. You know what it is like. You cannot eat, you get nauseated and you grow dark and become thin.

After a while, I went to Prayer House to wait in the presence of God. One day, I told Pastor Jean that I was going for chemotherapy and asked her to pray for me. She said, "Why ask me to pray when you want to go for chemotherapy? Chemotherapy will kill you."

She showed me what the Bible says about King Asa in 2 Chron 16:12-13: "And in the thirty-ninth year of his reign, Asa became diseased in his feet, and his malady was severe; yet in his disease he did not seek the LORD, but the physicians. So Asa rested with his fathers; he died in the forty-first year of his reign."

Something in my spirit arose. I did not want to die. I was going to trust the Lord all the way. So I went straight to the oncologist to tell him I was not going on with the chemotherapy anymore. He scolded me, saying that I was responding so well, why would I want to stop? I told him that I would trust my Jesus, the Great Physician, and I just left. The doctor said that it was my life anyway.

So I went back and continued to go to Prayer House. I drove Pastor Jean to wherever she ministered, just believing that I was healed. True enough, I was healed. I did not even know that I was healed until one day, a Christian doctor told me not to assume that I had been healed but to go for a check-up. It cost me more than RM1,000 for the test. But, praise the Lord, I was clear of all cancer!

I thank God for He is a miracle-working God, even today. I believe in the word of God that "I shall not die, but live, and declare the works of the LORD (Ps 118:17). That's why I am here today, praise the Lord!

<<< Back to Testimonies page